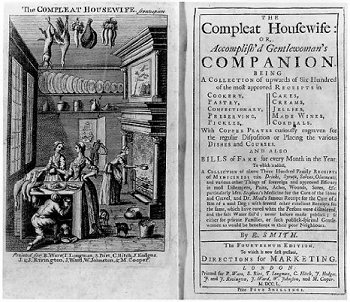 The Compleat Housewife, or Accomplish'd Gentlewoman's Companion, written by Eliza Smith and originally published in London, England, in 1727, is considered the first cookbook ever to be published in the United States. The Compleat Housewife contained not only recipes, but also directions for painting rooms, removing mildew, and home remedies for treating ailments, such as smallpox.

Take two pounds of the lean part of a leg of veal; take of beef-suet the like quantity; chop them together, then beat them together in a stone mortar, adding to it half a little cabbage, scalded, and beat that with your meat; then season it with mace and nutmeg, a little pepper and salt, some green gooseberries, grapes, or barberries in the time of year. In the winter put in a little verjuice; then mix all well together, with the yolks of four or five eggs well beaten; then wrap it up in green cabbage leaves; tye a cloth over it, boil it an hour: melt butter for sauce.