Jam Roly-Poly features in Mrs Beeton's cookery book, as Roly-Poly Jam Pudding. This pudding is one of a range of puddings that are now considered part of the classic desserts of the mid 20th century British school dinners. Much loved, as part of the nostalgia of growing up for some older British adults, Jam Roly-Poly is considered alongside sticky toffee pudding and spotted dick pudding as an remembered part of their childhood. 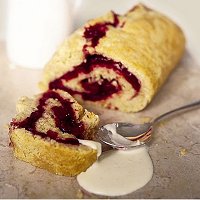 Pre-heat the oven to Gas 6, 200 centigrade. Start by sifting the flour into a bowl with the salt. Add the suet and enough water to create a soft but not too sticky dough.

On a floured surface, roll out the dough to a 20 x 30 centimetre rectangle. Brush the rolled out dough with the warmed raspberry jam leaving a 1 centimetre border around the edge. Brush the border with with milk and fold over all around. Roll the rectangle towards you from the short side but not too tightly. Place on a greased baking sheet with the seal side downwards. Brush with beaten egg and sprinkle lightly with caster sugar.

Bake in the oven for 35 - 40 minutes until golden. Dust with with a little more caster sugar.

Listed in the Sweet Sauce section of the website.