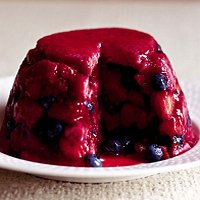 Summer pudding or summer fruit pudding is a British dessert made of sliced white bread, layered in a deep bowl with fruit and fruit juice. It is left to soak overnight and turned out onto a plate. The dessert was most popular from the late 19th to the early 20th century. However, there is no clear record of its origin.

Making summer pudding is much easier if the bread is somewhat stale. This helps the fruit juices soak through the bread, which makes the pudding more pleasant. Summer pudding can be served with cream.

1. Mix the first 3 ingredients and leave for 5-10 mins. If you're using defrosted fruit, tip in
some of the juice, too. Meanwhile, line a 1.2 litre pudding basin with cling film, leaving an
overhang. Cut a circle of bread to fit the base, then quarter the rest.

2. Drain the juices from the soaked fruit into a bowl, dip the bread in until soaked. Layer up the
fruit and bread, pour over the remaining juices and cover with the overhanging cling film -
weigh down with a small plate and a couple of cans. Chill in the fridge for 10 mins or until
ready to eat.